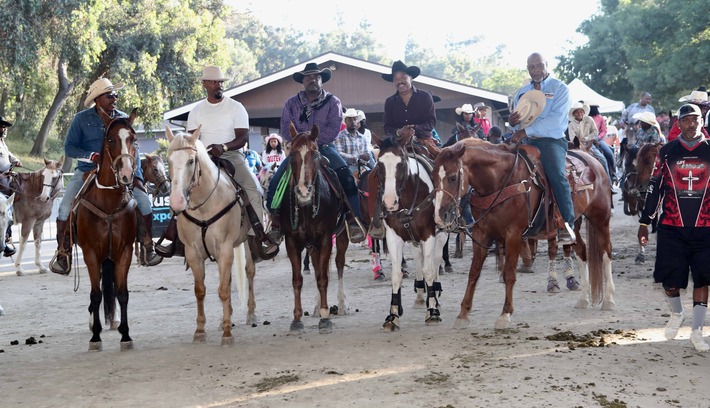 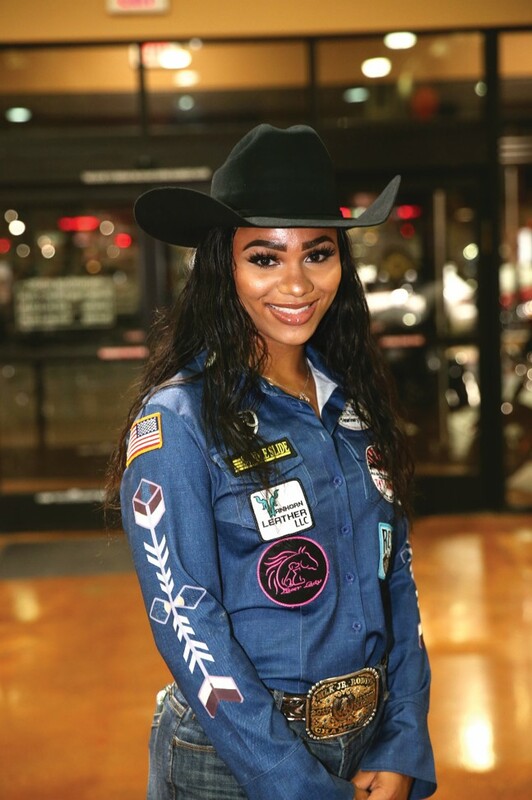 “I don’t want to watch it. I want to do it,” Aleeyah Roberts recalls saying to her parents when they took her to watch her first rodeo at the age of four in Colorado Springs. A few years later she had her own horse and was regularly competing in rodeos. She was indeed doing it. Though she wasn’t the only female competing in rodeos through the years, she was often the only African American participating. Today, the 20-year-old college student is a champion cowgirl in the only African American rodeo that tours the country from coast to coast, as well as other rodeos.

This reunion would not exist on the national level without the vision of the late Lu Vason, a longtime entertainment promoter in the Denver community and the founder of BPIR. In 1977, during Wyoming’s Cheyenne Frontier Days, Vason’s interest turned toward rodeo when he noted the absence of Black cowboys and cowgirls participating that day. Over the next couple of years, he conducted research and found thousands of Black cowboys and cowgirls across the United States lacking the opportunity to showcase their talents. 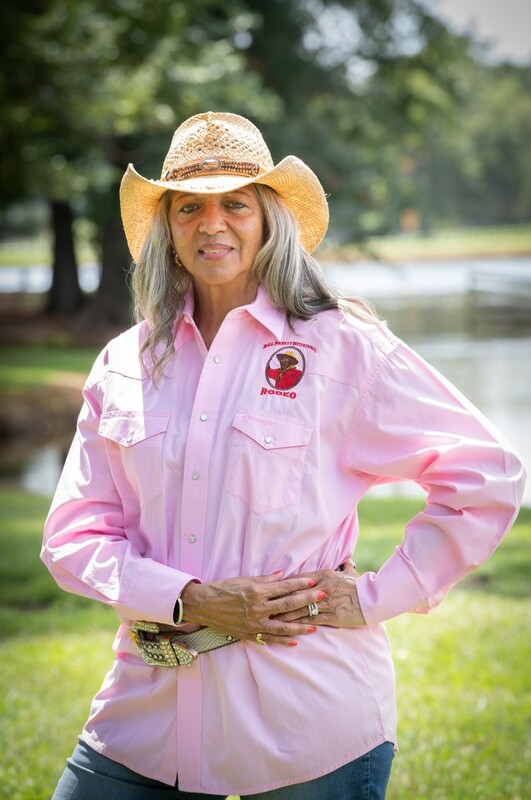 “I was so impressed he didn’t let anybody talk him out of doing the rodeo,” says his widow Valeria Howard-Cunningham about the naysayers in those early days. “They tried and they were very negative.”

A retired insurance executive, Howard-Cunningham is the only African American woman owner and promoter of a touring rodeo circuit in the world. She understands her unique position.

“Women in the rodeo business know if you want to succeed you have to develop a very strong backbone. Rodeo is a man’s world and we all know that,” she says. “When you add being a Black woman on top of that, it has additional challenges and opportunities. You have to stop to do a proper assessment to see how to overcome them.”

When she took on this new role, she followed her own advice and started developing a strategic plan to keep the rodeo evolving for generations to come. She stayed focused on the vision even when the pandemic hit. Like many major organizations, BPIR cancelled its 2020 and 2021 season tours in the hopes of protecting its staff, audiences and partners. Fortunately, she ensured the rodeo audience was entertained with virtual rodeos and educational components.

“We didn’t just go to sleep and stop thinking about” the rodeo, she says. In fact, she positioned the rodeo for a couple of historical milestones. The BPIR aired for the first time on television on June 19, 2021—Juneteenth.

She cherishes the blessing of having the first African American touring rodeo televised in American history, the same year that United States President Joe Biden signed the Juneteenth bill, making it a federal holiday commemorating the end of slavery in the U.S. The show was taped in Las Vegas a week earlier, with footage of the top contenders making it to the CBS broadcast.

The national broadcast was part of a partnership, announced in February 2021, between the Professional Bull Riders (PBR) and the BPIR in which the two organizations work together to create new events and opportunities for the largest and longest-running rodeo celebrating Black cowboys.

Under the partnership, PBR, the world’s leading bull-riding organization, will co-produce and co-market some BPIR events alongside competition in PBR’s top two U.S. tours in select markets.

Howard-Cunningham notes that there were Black rodeos prior to BPIR but they were smaller rodeos with no national stage. “The Bill Pickett Invitational Rodeo creates opportunities that you may not get somewhere else. Our work is not over. We need to transition to the next level with other rodeos with larger pots of money,” she stresses, while noting that the hard work that comes with progress is worth it. “I can see the good and celebration for the Black cowboys and cowgirls that will come at the end.” 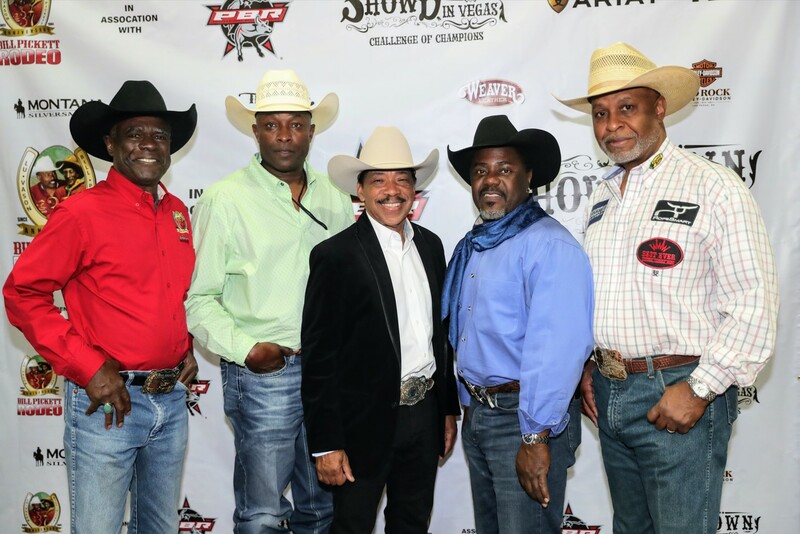 When making the announcement about the partnership, PBR Commissioner and CEO Sean Gleason said, “We are thrilled to partner with the largest and longest-running touring African American rodeo celebrating Black cowboys and cowgirls and their contributions to the American West. PBR will help produce and promote these essential rodeos, helping to keep important and underappreciated Black cowboy traditions alive, developing the next generation of champion cowboys, and bringing the sport of rodeo to a new generation of fans.”
Emmy-award winning actor, director and producer Glynn Turman said of the partnership, “I can’t tell you how happy I am to hear about this alliance – having served as Grand Marshal of the BPIR for 35 years as well as being a big fan of the PBR. It is with great anticipation that I look forward to seeing this ‘greatest show on dirt’ presented over the airwaves and streamed into people’s homes.”

Howard-Cunningham is also excited about the partnership and believes it will assist in elevating the opportunities for Black cowboys and cowgirls. She understands that everyone needs someone to help them get to the next level.

Such exposure was a long time coming, but it was great to witness for those who have been with the rodeo since day one. 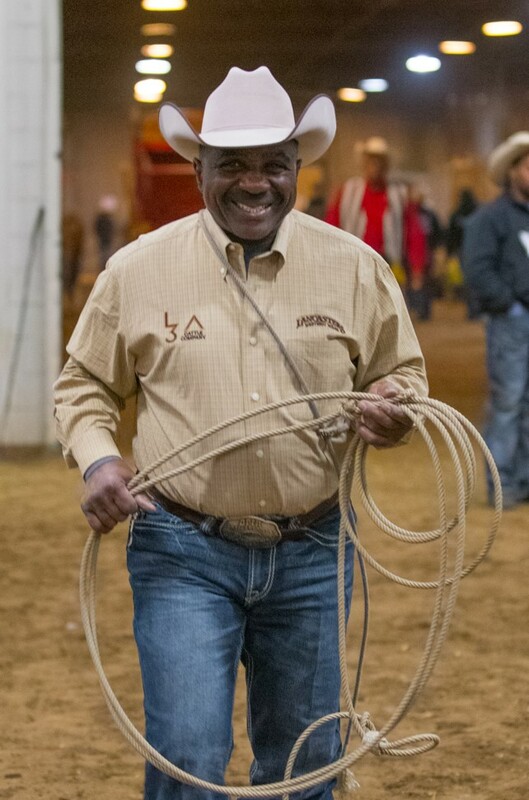 “It was an excellent show,” says Maurice Wade, a tie-down calf-roping champion, who was one of the gentlemen that Vason consulted when researching the idea of a Black rodeo. He’s been along for the ride ever since. The 73-year-old Vietnam War veteran and former U.S. civil servant turned to rodeo as a therapeutic way to address his post-traumatic stress disorder following the war. He also immersed himself in the rodeo lifestyle to fulfill his childhood dream of being a cowboy, which is not cheap.

When Wade was a kid he learned about cowboys from watching Westerns and from visiting his grandfather’s farm in Mississippi. “In this sport, we pay our own way to get down the road, and compete for award money,” according to Wade, who counts BPIR as his first competition. “It’s much different than the NBA and NFL with corporate sponsors and billion-dollar stadiums.”

“It is an expensive sport to be in,” shares Howard-Cunningham, pointing out that participants must pay for their own horses, trailers, hay, and gas to travel. She is in awe of the competitors because “you have to be passionate and committed to be a cowboy or cowgirl.”

Roberts offers, “People may not be financially set up to own horses, but they can at least support.”

She adds that young people that she meets during the tour often want to know if being a cowgirl is hard. For her, “It’s not a yes or no answer. Sometimes it’s hard, but I like a challenge. It motivates me to be stronger.”

Roberts is also passing on that mentality to her 14-year-old sister, Savannah, who was the 2019 BPIR Ladies Barrel Racing Champion. She is proud to see her “carving her own path. I see her coming out and challenging herself. It’s awesome.”

The vision of the Bill Pickett Invitational Rodeo is to continue to educate everyone about Black Western heritage and the significance of Black cowboys and cowgirls, BPIR will continue to provide a cost-effective family entertainment event that is educational, fun, and safe while continuing to entertain all ages and nationalities.

Every effort is put in place to make the BPIR a family-friendly event. A special moment that many look forward to is the crowd coming together to sing the Negro National Anthem.

“We watch what kind of music is being played and what words are being shared. We create a safe environment for our community and our contestants. People are not wondering what their children are going to be exposed to. When they leave our rodeo, they take with them a sense of pride,” says Howard-Cunningham.

She and her husband, Ronald Cunningham, who operates his own nonprofit for youth, have a shared passion for the youth. They believe it is very important to “embrace youth and assist in all aspects of life.”

As a result of that passion, she says at the rodeo, “We embrace young people and make them feel safe and protected. We try to create an environment where they don’t have to worry about racial discrimination and mentorship. We love lifting them up and guiding them.”

“We have young and old African Americans who still want to experience the rodeo. Everybody wants to be a part of the Bill Pickett Invitational Rodeo. Our rodeo family reaches all over the country and for that we are very proud and thankful. People come by the bus loads and it is quite something to see, which is why we try to create an experience that they will never forget.”

“Lu Vason united cowboys all over the country,” adds Wade. “This awakened a lot of people. No one would ever realize this had we not had a traveling rodeo.”

Next year’s tour has lots of new programming on tap, including new cities. In 2022, BPIR is offering a dual path to reach the BPIR National Finals with a Texas Connection Series and a BPIR Legacy Series. To kick off the year, the MLK Jr. African American Heritage Rodeo of Champions at the National Western Stock Show is slated for January 17, 2022.

Launched in 2006 during the stock show’s 100th anniversary, the event has amassed a loyal following. Howard-Cunningham says, “We were not sure what kind of community support we would get when we decided to do the MLK Rodeo in Denver, but the community came out to support. No matter where we go or what city we are in, that’s the reaction of the community. They feel like the Bill Pickett Invitational Rodeo is something that belongs to them. It’s not compromised. It’s theirs.”