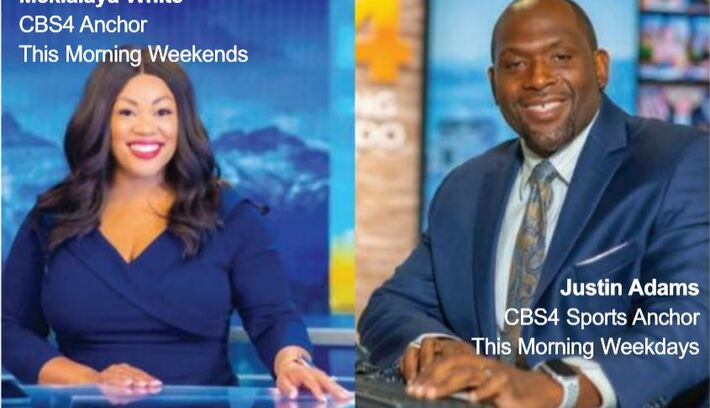 Colorado’s broadcast TV stations are changing at a rapid pace and so are the people who deliver the news. Viewers used to have to sit down in front of a television to watch accurate, local news and programs. Now, up-to-the-minute updates are available anywhere, on any device. Local anchors and reporters who know the community and understand it deliver the news in innovative ways on TV, on the internet and via 24-hour streaming services.

We sat down with CBS4 Anchors Mekialaya White and Justin Adams who are both Colorado natives. Mekialaya joined CBS4 Denver in 2018 as a part-time writer and in January 2019 became the morning reporter for CBS4 This Morning weekdays. She has served as a fill-in anchor on multiple newscasts but was just recently given the weekend morning anchor desk.

Justin started at CBS4 as a part time reporter. He was just named a full-time sports anchor and is also contributing to digital platforms, producing stories for www.CBSDenver.com and special segments for CBS Colorado News. Justin is a native of Denver and graduated from Montbello High School and the University of Colorado.

Mekialaya: how did you get your start in the television business and what is it like covering the community you grew up in? I got my first taste of the TV business as a writer, reporter, and anchor at my alma mater, the University of Northern Colorado. (Go, Bears!!!) My journalism class produced a campus-wide newscast called “Bear News.” It feels like forever ago – I still had so much to learn! But I was honored to give back to my fellow classmates in telling stories that mattered to them. I remember covering the 2008 presidential election, the excitement on campus at that time, and how my classmates wanted to stay informed on such a monumental event. I’m a proud Coloradan, raised in Colorado Springs, and it’s been an absolute dream to empower people in communities I am passionate about.

Justin, what about you?

Justin: Ever since I was six years old I knew I wanted to be on TV. I remember watching Game 1 of the 1992 NBA Finals where the Portland Trail Blazers were playing the Chicago Bulls, where Michael Jordan his six 3-pointers in the first half, and I knew I wouldn’t grow up making shots like MJ, but I wanted to be the broadcaster calling that play and that moment. It was the birth of a passion that’s still burns deep inside me. It’s truly a blessing to cover the same community where I grew up walking the streets. The best part is being able to further let the viewers know why something is so important to a particular portion of the community. It helps me to paint a clearer picture of a story to those watching every day.

Now that you’ve been in your new roles for a bit, is it what you expected?

Mekialaya: It has been a dream! After two years reporting for CBS4 This Morning during the week, and several months working my way up behind the scenes prior to that, moving into the role of anchoring Saturday and Sunday mornings is such a thrilling new challenge to take on. I am so grateful to everyone who’s helped me grow immensely in this journey. Having grown up in Colorado, it is ALWAYS home. I pinch myself daily that I get to do what I love!

Justin: This role has been what I have expected and so much more. It's great to be in a position where one day you're informing the audience of the top news stories of the day, and then you are updating viewers on breaking news, and finally, getting the chance to anchor the top sports stories of the day. It's the opportunity to sharpen my skillset in so many different areas that keeps this role so intriguing.

What story have you covered that has had the biggest impact on your life?

Mekialaya: I do a weekly story called “Wednesday’s Child” that highlights a child in the foster care system who is in need of a permanent home. Without a doubt, those stories have changed my life and are among some of the most important I tell. The child and I typically spend a morning doing an activity together to make the child feel special, which is everything from hanging out at the zoo, getting pampered at a salon day for the first time, even riding roller coasters. Just spending that time together is meaningful and it’s an honor to be a part of their journey to adoption.

Justin: The biggest story I've covered so far that has had an impact on me personally is when the Montbello Warriors (Far Northeast Warriors) won the 5A high school football championship this past spring. The reason why this had such a major impact on me was that this was the school I graduated from. As alum, it was great to see how the win helped bring the Montbello community closer together to celebrate the achievement of the young men.

What advice would you give someone who wants to be a broadcast journalist?

Mekialaya: Be tenacious! Being a journalist can be demanding and A LOT of work, coupled with A LOT of joy. My biggest piece of advice I’ve always given to students aspiring to get into the journalism field is that “it only takes one yes.” Also, you can never be too curious.

Justin: Don't wait for an opportunity to come your way. Just get started. You don't need anyone's permission to follow your dreams of being a broadcaster. Develop a website, rent camera equipment from Denver Community Media, and start putting together stories for your resume reel. It's also important to network and to put yourself out there. Also, be flexible and prepared to move to where the broadcasting opportunities are. This will not only help you get your foot in the door, but it will also help lead you to your first job in the industry.