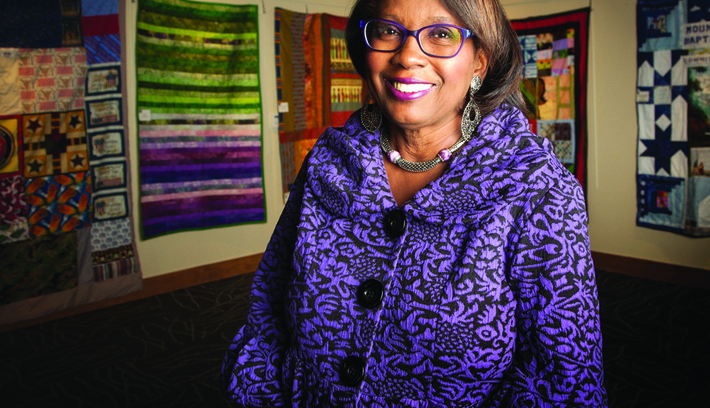 Since high school, HOPE Center’s CEO Gerie Grimes, 66, has been an advocate for people’s rights. Hope Center serves special-needs and at risk children and adults.
“I would say growing up in the ‘60s and‘70s, when the movement was there, I was always about trying to make a difference in speaking up in whatever venue,” explains Grimes, a Denver East High School graduate.
High school is where Grimes says she found her drive, and the fact that both of her parents were born in racially charged Mississippi, and just understanding their history and what they went through shaped the person she would become life.
“I had difficulties in the school system,” Grimes says. “I was exposed to the disparities and inequities based solely on the color of your skin.”
However, those hurdles did detour Grimes from pursuing a world-class education. After graduating from East, she pursued an associate’s degree in early childhood education at the Community College of Denver. Next: a bachelor’s degree in non-profit administration from Metropolitan State University of Denver. Then it was onto graduate school where Grimes earned a Masters in non-profit administration from Regis University in ’92. She was one of the institution’s first graduate students when the program was introduced in 1990.
Currently Grimes is a Ph.D. candidate at the University of Denver, working toward an Educational Policy Studies with an emphasis in Early Childhood Administration. Grimes has her sights on graduating this summer in August.
“It’s been a long, long, journey,” she says.

During Grimes three-decade tenure at the HOPE Center, she says one of her many finest hours is seeing their former preschoolers, who are now adults bring their children to the program.
“I’ve been at the HOPE Center for 36 years now in different capacities,” Grimes says. “I’m the president and CEO, but I actually started as a bookkeeper in our vocational program.”
Grimes explains that HOPE Center, located at 3400 Elizabeth St. in Denver, offers several outstanding programs from different perspectives, including children, gifted and vocational platforms.
“We serve children from special needs to gifted, because all kids come with different talents and gifts. We serve about 250 families per year. At the early childhood program we have 22 staff members and five in our vocational program with 30 adults. All are full-time.”
Among her leadership roles in the community, Grimes has served on numerous boards and committees including, the Center for African American Health, Denver Early Childhood Council, Metro State University of Denver’s Board of Trustees and Alumni Board, Colorado Black Women for Political Action, Falcons Youth Organization and the Police Activities League.Currently she’s the board treasurer for Colorado’s Association for the Education of Young Children.

Grimes’ hard work and dedication to the Denver-area community’s special-needs andat risk children of color has paid off. On March 28, Grimes will be inducted into the Colorado Women’s Hall of Fame – the non-profit volunteer organization that recognizes women who have contributed to Colorado history. She’ll join a unique sorority of outstanding Coloradoans from stateswomen, educators, civil rights activists, media insiders and even an astronaut.
Being inducted is no mere feat. Colorado Hall of Fame officials onlyaccept 10 women every two years – six contemporary and four historic figures.
Colorado Hall of Fame 2018 contemporary class includes president of the Gathering Place Leslie Foster, Astronaut Susan Helms, University of Colorado Chancellor Dorothy Horrell, attorney Fay Matsukage, former Colorado Lt. Governor Gail Schoettler and of course HOPE Center’s CEO Gerie Grimes – a nomination that was definitely one of shock and surprise for Grimes.
“I will say that,” she says. “I knew they sent out nominations, and I got emails too, so I was aware and familiar with it. I knew some of the past recipients who had been inducted. When I was nominated, it was actually just an honor to be even considered.
“Many women, who are the ‘sung and unsung,’ as well as those in the public eye just to be on that platform is definitely an honor. I’m in good company and from all walks of life. As it gets closer, you do look and say, ‘Wow! This is really happening.’ I have so many family members who are just so proud and excited. And that brings excitement to me to see their excitement as well.”

Grimes believes when children, regardless of the color of their skin, have a fair playing ground, they all will achieve greatness. And that belief has served her well through the years, and all the way to the Hall of Fame.
“We’re talking about the equity too,” she says. “It’s both a combination. I honestly believe that’s why I’m in this field.”
Hope Center serves primarily children of color, and which Grimes underlines is very important to her that what they are exposed to and offered is at the highest level. Training them to reach their highest potential means we have to be cultural relevant in everything we teach and demonstrate within HOPE Center. From the book they use, to the people that they see in the various leadership roles, to the food we serve – it’s all of that.”
So what’s next? “I’d like to do more speaking in regards to cultural type issues, racism, bias that impact all of us. I speak a lot to upcoming teachers. It’s more than reading a book, it’s how you act and demonstrate you are part of the neighborhood. I’d really like to speak on more of that and more professional development type presentations.”

Grimes says there were so many individuals who inspired her, including former Hope Center’s board member, MSU Denver’s Dr. Marilyn Chipman, whose passion in early childhood wasa inspiration, and former HOPE Center Director George Brantley, but most importantly her parents.
Grimes punctuates the fact that it’s important for people to know that being raised by her mother and father, and having five sisters and one brother, shaped her more than anything else into the person she has become today.
“I’ve never given up,” she says. “My parents were always up lifting. And growing up in the ‘50s and ‘60s, their challenges were greater than ours. But they stood beside us with all of our challenges.”
Grimes says being exposed to a lot in the school system, is what drove her into education. She says she was overlooked, undermined, and not accepted by the teachers, “Which made me feel like, ‘Why try?’” but was encouraged by her parents to keep going.
“My sisters, my husbandand my two boys have been behind me all the way. So I have family. And, that makes a difference.”