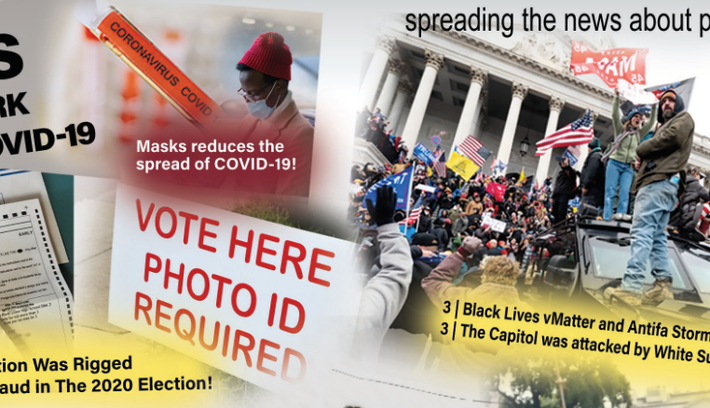 How Fake News and Misinformation is Reshaping the Field of Journalism

How Fake News and Misinformation is Reshaping the Field of Journalism

The field of journalism is in a state of rapid, constant transformation. The masses now consume news and information through various digital platforms making it possible to communicate globally within mere seconds.

This has given rise to the proliferation of misinformation, disinformation and propaganda masquerading as reliable news content. Largely driven by cable news, the internet, social media platforms, talk radio and the ubiquitous citizen journalist, news organizations and systems have become polarized. This contentious atmosphere has led to a steep decline in public confidence in the journalism profession.

As evidenced by the attack on the U.S. Capitol this past January, this so-called fake news comes with life-threatening consequences and represents a dangerous challenge to democratic systems.

Disinformation and propaganda are closely related, spreading news that is deliberately false and designed to harm a person, group, organization or nation. Misinformation, on the other hand, is information spread to simply mislead but is not specifically created to cause harm.

Journalism is the only profession expressly mentioned in the U.S. Constitution. The right to a free and independent press is guaranteed by the 1st Amendment. A democracy cannot thrive without it. Therefore, the wholesale assault on legitimate journalism poses a clear and present danger to a democratic nation.

The constant ping of our cell phones conveying “breaking news,” brings instant information from sources that may or may not be factual. According to a 2017 Pew Center study, 93% of all Americans receive news through online modalities.

As digital natives, young Americans do not recall a time when electronic devices were not an essential part of everyday life. Consequently, they are the most at-risk of unwittingly consuming misleading and false information.

A recent Gallup Poll asked Americans how much confidence they had in mass media over the past 20 years? The poll found a dramatic drop from 1997 to 2017, indicating that public trust in news accuracy has declined from 56% in 1997 to 32% in 2017.

More recently, false claims of rigged elections and myths about COVID-19 safety measures, such as social distancing, masks and hand washing, continue even as the nation entered a third wave of infections exceeding 200,000 per day.

The issue becomes more convoluted as suggestions for curbing “fake news” call for actions such as censorship of social media posts are clearly counter to the American idea of free speech.

According to media watchers like Marc Ambinder, a senior fellow at the Center on Communication Leadership and Policy at the University of Southern California Annenberg School for Communication and Journalism, all media outlets should be required to implement more robust quality control measures.

“All platforms need to set up viral ‘circuit breakers’ so they can immediately assess whether rapidly shared material is harmful to election integrity or public health,” Ambinder said. “That should be the threshold for action, because anything more than that risks generating the attention-grabbing meta-debate about censorship and expression and anything less could be damaging to democratic institutions.”

So, where do consumers turn in order to find news they can trust?

Most experts point consumers to what are called legacy media sources. These are considered the old guard of media outlets. They are trusted because their reputations are based on getting the story right. The New York Times, The Washington Post, Chicago Tribune, Miami Herald and your daily newspaper rely on seasoned correspondents. Traditional television and radio sources such as the NBC Nightly News, ABC Evening News and NPR are also considered legacy outlets. Additionally, your local community newspaper is also a reliable source for keeping you abreast of what is happening in your neighborhood that may affect you directly.

Unfortunately, many consumers are not distinguishing news from news analysis. The constant 24/7/365 news loop on CNN, Fox and MSNBC, for instance, is not news by and large. What they present is news items discussed by panels of pundits who assess and evaluate what is being presented in the news. Much like what we find online, opinions do not qualify as news.

This is not to suggest that all online information is not trustworthy. The amount of misinformation online is still estimated to be very low. However, social media platforms like Twitter and Facebook have been used to spread questionable information.

It may be a bit too soon to determine whether the efforts by Facebook, Google and Twitter to monitor false information have been effective. Either way, fake news and information posing as legitimate journalism is not expected to simply disappear anytime soon.

But even as Americans recognize that false information causes confusion about events and issues, it has not stopped us from spreading it. The Pew Research Center in December 2016 found that 23% of U.S. adults actively shared fake news with online contacts and friends, whether they realized it or not.

The concept of fake news is not a new phenomenon. Since as far back as most experts can recall, information has been used to influence public opinion. More recently referred to as “yellow journalism,” it was designed to purposefully misinform the public using sensational content and eye-popping headlines. However, since information online has not heretofore been closely managed, it has been easier to circulate exaggerated claims. Today’s technology lures readers with “click bait,” which is useful in keeping eyes on the page for longer periods allowing for more opportunity to potentially spread mistruths.

But why are we so susceptible to this misinformation?

Many scholars suggest that people tend to believe and search out information they believe. The added elements of social media and a global network of “friends” tend to cause people to let their guard down where co-workers, family members and others share a wide variety of pictures, rumors, humorous clips and gossip. Most people are less skeptical of information they receive from someone they know.

The latest research appears to indicate that repeated exposure to fake information causes people to believe the false statements. For example, in a study conducted by Lisa Fazio, a psychology professor at Vanderbilt University, she found that people are often willing to believe misinformation that is repeated over and over again even when they are knowledgeable about the subject being discussed.

Additionally, a study in the Journal of Experimental Psychology showed that readers who were presented with a false headline were more likely to believe it was authentic when they saw it again. Further, even if the headline came with a disclaimer indicating that the facts may be questionable, study subjects still believed it if they had already been exposed to the lie.

If people believe that the news is true, they are more than likely to share it. As a result, research is now turning to investigating how to design methods to prevent its instant dissemination.

Throughout the country, news literacy programs are becoming an increasingly popular way of helping Americans improve their ability to assess authentic online content. Naturally, these programs are relatively new so data on their efficacy is not readily available. Efforts to fact check all information has proved to be too time consuming to be effective. In fact, some researchers fear it may actually backfire.

In a 2010 study titled “When Corrections Fail: The Persistence of Political Misperceptions,” it was found that people often hold on to incorrect information when presented with factual information. For instance, the study reported that when conservative members of Congress were offered correct information regarding the lack of weapons of mass destruction in Iraq, they became even more convinced that the weapons did in fact exist. Evidence of this human tendency is also observed when medical and scientific proof suggest that the COVID-19 vaccine is effective in fight the coronavirus, but the general public still refuses to believe the evidence because of what they had previously heard through other news sources.

Ipsos Public Affairs, a market research company, conducted a survey that revealed that fake news headlines convinced American adults of their veracity approximately 75% of the time, and were remembered by a large section of the electorate as credible though they were false.

The consequences of this truth can, and have had, exacting repercussions. False information about climate change, child abuse, public health, and political corruption, for example, has proven disastrous. Given that the role of journalism is to ostensibly check the power and follow the money, the profession’s mission looks to be in grave jeopardy.

Fake news can encourage inflammatory and discriminatory notions that enter public discourse and be cast as facts. Once the information has taken root, it can be used to create scapegoats, solidify the us-versus-them dynamic, justify violence, and normalize discrimination and open biases.

A recent social media assessment claimed that the 20 most widespread fake stories generated more than 8.7 million shares, comments and reactions compared to 7.4 million generated by legitimate news stories. The assessment concluded that when false news goes from haphazard and sporadic to organized, coordinated and systematic, it can quickly turn into disinformation campaigns. This level of disinformation has the potential to interrupt the governance of entire nations.

The job of journalists to convey fact-based information has been made more difficult as the industry as a whole has been framed as the enemy of the people by the former president of the United States. Many now view it as acceptable to harass, threaten, arrest and even physically attack reporters. The social media assessment also found that the media’s image has plummeted to a 13-year low.

Most journalists might agree that the answer cannot be found in overly restrictive regulations on internet platforms in an open society. The precedent set by such actions only encourages censorship.

Addressing the issue of fake news and misinformation falls to every citizen to combat the scourge of these phenomena. Openly supporting investigative reporting and working to improve digital and information literacy among the general population may well be the place to start.