A Denver COVID survivor finds her footing amid her fears

A Denver COVID survivor finds her footing amid her fears

Photos by Marc A. Piscotty 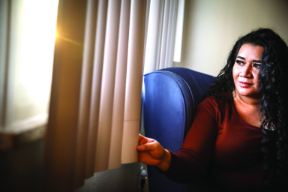 Until this year, Elizabeth Torres would not have called herself a particularly anxious person. Stressed, sure. Who wasn’t? Everyone has ups and downs.

Torres was working a couple part-time jobs, taking care of her elderly grandparents, raising three kids on her own. Her son, the middle child, has been diagnosed with autism and he likes to get right up into her face, something she really can’t deal with now. When he comes to her lately, “Mom,” on his lips, she can imagine a fine spray of coronavirus cells landing upon her cheeks, nose, and eyes.

She and her three kids were living in the basement of her grandparents’ place in southwest Denver when COVID-19 hit Colorado in early March. She made sure her grandma, who has dementia, and her grandpa, whose heart was failing, took their medications, and that her grandpa had his lunch when he headed to dialysis every other day.

Torres started feeling feverish toward the end of March. With frail grandparents, she decided to play it safe and move into a friend’s bedroom to quarantine.

Her grandpa was hospitalized after a fall and then diagnosed with COVID-19. Torres’ fever spiked and she began laboring for breath. She went to the ER twice before being admitted with her own case of COVID, her grandpa in a room somewhere nearby. She is in her 30s, but overweight with high blood pressure and asthma, and the virus hit her hard. Her lungs felt like they were burning.

When her fever finally did break and she was able to breathe on her own a week later, Torres was discharged, oxygen tank in tow. Her 85-year-old grandfather wasn’t so lucky. He died at Denver Health on April 1, a few days after she left the hospital. Torres uses the word “passed,” a word like “died” that fails to convey the surreal-ness of his last days. She mourns not being able to say goodbye to the man who raised her as a father would.

It has taken months for Torres to begin to feel herself again and she says she does feel better, mentally and physically, though she would not call it back to normal. Fear accompanies her now. She says her kids think she is paranoid. She has “panic attacks from hell.”

Torres wore a heart monitor for a while after she left the hospital because she was experiencing pounding palpitations, which may be an after-effect of COVID, but also could be stress. That she doesn’t know for sure frustrates her. Too much is uncertain now. Too much unknown.

There are times when she does not recognize herself. Who is this cautious woman whose heart hammers when she hears her kids cough or when the latest national political outrage pops up in her social feeds despite her best efforts to avoid the news. The late summer fires, the smell of burning forests when she opened her front door, filled her with dismay. Who is this woman who dreads going out?

“I just feel mostly sad,” she says. “I am not like this. I am a person who loves to be out and about. I am very social. And there is just all of this. I can’t go outside. I can’t be with my friends. Coping with that has been very hard.”

Until recently, she was not one to speak so candidly about her feelings.

She might have confided in a few friends. But in the calamity that is 2020, she became so sick she thought she was going to die. Her grandfather did die. And what she knows is that she needs to talk because the words lift weight off her. She is certain that others are struggling and wants to reassure them that they are not alone. Be hopeful, she wants to say. “It is what we need. Hope.”

So, Torres wakes in the morning now and says to herself, to the universe; Thank you.

She has taken to meditating frequently and has changed her diet, drinking juices, taking vitamins, eating healthier, trying to walk in nearby Garfield Park. When she feels really bad, a friend will take her for a car ride; she will tell her kids that she just needs to chill for a while.

Torres knows there will still be ups and downs, good days and bad, and that there remain big question marks on the horizon. But sometimes, the way forward does not require motion. It does not require answers or even thought. Sometimes, she has found, the path forward means sitting in her backyard, planting her feet on the ground, face turned toward the sun, heat bathing her until the anxiety passes and, once again, she feels rooted and whole.

Editor's note: To capture the current psyche of our state, Denver Urban Spectrum is partnering with nearly 100 others through the Colorado News Collaborative (COLab) to document how Coloradans are coping. Our hope is that in a state where stigma around mental health struggles runs high, this reporting and the conversations that follow will prompt better understanding of widely misunderstood and hidden experiences.