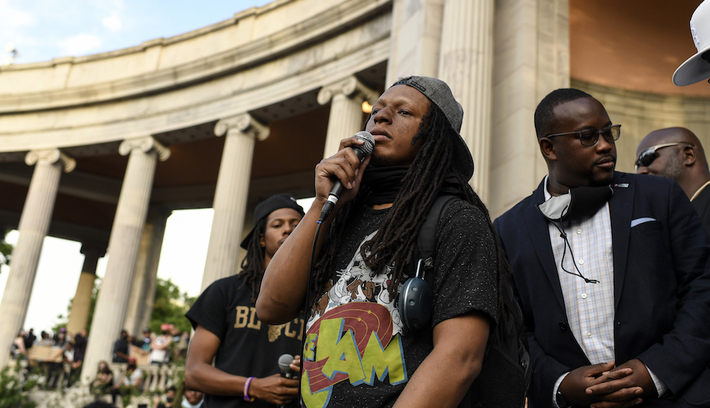 At nearly every turn in Denver, protesters confront a reason to march

Kenny White, a black man in his late 20s, joins the downtown Denver protesters near dusk. A speaker has just wrapped his exhortation to the hundreds gathered at the west steps. “This is not a black-versus-white issue,” he says. “This is an us-versus-them issue.” The words “By any means necessary” are spray-painted on the Capitol wall behind him. Across the street, in the Civic Center amphitheater, Pastor Rico Wint is collapsing 400 years of black history into a plea for people to educate themselves: “If you know more about the Jordan Rules than the Black Codes, you have a problem.”

It is the eighth night of nationwide protests set off by videotape of a white Minneapolis police officer’s indifferent asphyxiation of a black man named George Floyd. It is the eighth night White has come to the Capitol to march to demand accountability. He will be here on the ninth night and the 10th and the 11th and the 12th. He will be here as long as there are protests, as long as people are listening, as long as he needs to be.

“How long was the bus boycott in Montgomery? A year? It takes time to get real change done,” White says on Day 12. “I’m not here for Day 10 or Day 14. I’m here for Day 365, Day 710. This shit has to stop before I have kids. I never want to have to explain to my kids why the world is a dangerous place because they look like me.”

“A lot of people think racism is the angry white person yelling at a black person calling them — it hurts to say this, but — a nigger,” White says in an interview on Day 9. “But why do that when I can control where you live, where your kids go to school, when I can control where funding goes in your area, when I control whether you get this job or not, how much you earn, whether you can buy this house or not. Racism is integrated with the system.”

They march in a state where in 2019 the percentage of black fifth-graders performing at grade level in language arts in 2019 was half that of whites, where the black infant mortality rate is nearly three times higher that of whites, where the rates of diabetes and childhood asthma and the levels of food insecurity are higher and life spans lower for black residents. COVID-19 rates in the state are also disproportionately higher among blacks than whites. (Similar gaps also exist between whites and Latinos, Colorado's largest minority group.)

And they march in a city where the public school system, forcibly desegregated during the lifetimes of many of the protesters, has long disproportionately punished black students with out-of-school suspensions. About 13% of Denver Public School students are black and they are disproportionately identified as having a disability and underrepresented in more advanced high school classes. In the 2017 and 2018 school years, when police handcuffed 155 Denver Public School students, nearly half of those students were black, Chalkbeat reported.

DPS’s four-year graduation rates have risen across the board, but the gap between white and black students continues, narrowing in some years, widening in others, but never closing despite attempts by a long line of superintendents. Last year’s graduating class saw a 13 percentage point gap, the second-largest since 2006, according to data provided to The Colorado Independent by the Denver-based Shift Research Lab.

The protesters pour from Denver’s Civic Center along sidewalks that lie in the shadows of bank and federal government buildings, the twin power centers that enforced the city’s past segregation by ensuring black residents could not get home loans, could not move to neighborhoods with better schools, stronger tax bases, healthier environments. They march past national banks repeatedly hit with complaints of discriminatory lending practices. They march through once-redlined neighborhoods where disinvestment made way for displacement and displacement for replacement of black by white. In the three census tracts that make up Denver’s once-black Five Points and Curtis Park neighborhoods, the poverty rate among whites, who now make up about six in 10 residents, is 11 percent. Among blacks it is 43%, data provided by Shift Research Lab shows. The share of white owner-occupied homes is 78%. Among blacks it is less than 2%.

The protesters move through neighborhoods where covenants forbade the sale of homes to black families through the late ‘40s and current zoning contributes to those homes’ lack of affordability. Some of the protesters come from a community in northeast Denver where last year property owners voted to keep the name of the former Denver mayor and ex-Klansman by which it is known.

“We’ve avoided this conversation for a long time because we seem to think that Colorado, whether it’s our history or how we’ve marketed ourselves or how we identify as Coloradans, we are somehow immune from this because we are not like the South ...Well, we are and we aren’t,” says Tom Romero, an associate professor of law at the University of Denver, whose research includes the legal history of the American West, school desegregation, property and land use. “Without understanding Colorado history, we create plausible deniability.”

What should be evident is that what happened in the past, whether 400 or 50 years ago, does not stay in the past, says Pastor Rico, who founded Young Men of Purpose, a Denver metro group that guides young, black men. It is not just the data that damns, he says, it is the messaging, large and small, that regularly casts black Americans as inferior. It is, he says, the Walmart in Montbello that locks up black hair care products, but not white ones. (Walmart on Wednesday announced it was changing this policy nationwide.)

“We have to divorce the nation from the idea that it was so long ago and see that the tentacles of the idea of black people, of what we are and what we are not, are everywhere around us now,” Pastor Rico says. “It’s our life. I have to go and ask someone to open up a case for haircare products …

“Words like ‘inequity’, ‘discrimination’, ‘marginalization’ are not just buzzwords, they are palpable to the people they affect.”

On the eighth day on Denver’s streets, the protesters march near the jail where sheriff’s deputies killed two black men, Marvin Booker and Michael Marshall, and then went unpunished. They head toward the long-ago Latino neighborhood declared blighted in the late ‘60s and razed to make way for the gleaming college campuses now in its place. Here, too, are reminders of disparity. Of those who enrolled in Colorado's public colleges and universities in 2014, the 40% of white students who graduated with a bachelor's degree four years later was double that of black students.

To the south of the campuses lies the public housing community where La’Queta McCauley once lived. She has joined the marches because “sitting at home is traumatizing ...  It is not mentally OK to deal with this constantly and to feel alone in this.”

On Day 10, McCauley, who works with special-needs children, follows the protesters in her car, trunk open, windows rolled down, calling out: “I have snacks. I have water. Help yourself.”

“You cannot unsee racism once you see it and become educated,” she says on Day 12. “You see it in all its forms. I see that family with the single mom and mom looks stressed and I know her kids are going to that school that is full of police officers and too many students and too many first-year teachers and not enough resources. I know she is living in a building owned by a white slumlord and the utility company is estimating her bills and overcharging her and that she is working two jobs and being underpaid in both. And even if she does make it to the point where she is earning a good income, even if she does make it like myself, I still had to live in public housing because the banks are biased and I could not afford to live in a house.”

Colorado’s public school and higher education systems, its departments of health and environment, education, corrections, and many city and county governments, publicly recognize systemic racial inequity and have, over many years, in many ways, sought solutions. What roars in the streets carries the trauma of generations and the acknowledgement of that trauma. What roars is a rebuke of small steps and a demand for sweeping redress.

By the second week of protests, the legislature, the city council and the police department are promising change and the state Senate has voted 32-1 to pass a police reform bill.

“If you’ve been a survivor of domestic violence and your abuser says, ‘I’m going to rehab,’ until you see it, it doesn’t mean anything,” McCauley says. “I. Need. To. See. It. We’ve played this game before. I’ve seen this movie before. This is systemic and that means a lot of changes need to be made.”

Accountability is imperative, White says, “on all fronts.”  Dismantle the police department and replace cops with social workers and mental health workers, he says. In the meantime, set up a truly independent public safety monitor. The mayor must be held responsible for the policies that harm communities. The legislature must do more than pass incremental bills.

For Pastor Rico, the next steps rely on education. “You have to teach people what happened so they know why black people are skeptical and why we are so tired. I have well-intentioned white friends who tell me they are exhausted. You’re exhausted? It’s been 12 days. Imagine being my grandmother from Missouri, a slave state. Imagine being my mother. Imagine black skin never washing off. Welcome to American blackness.”

In the face of repeated evidence of systemic racism and the toll it has taken upon men, women and children, a willful blindness persists, he says.

“It’s still, ‘Get up, dance, sing, use your artistry and dunk those balls and entertain us.’ Well, guys, we have some issues, we the people who built this country for free. We the people who have never been compensated. We have some things we want to discuss.”

This story is powered by COLab, the Colorado News Collaborative. Denver Urban Spectrum joined this historic collaboration with more than 20 other newsrooms across Colorado to better serve the public.