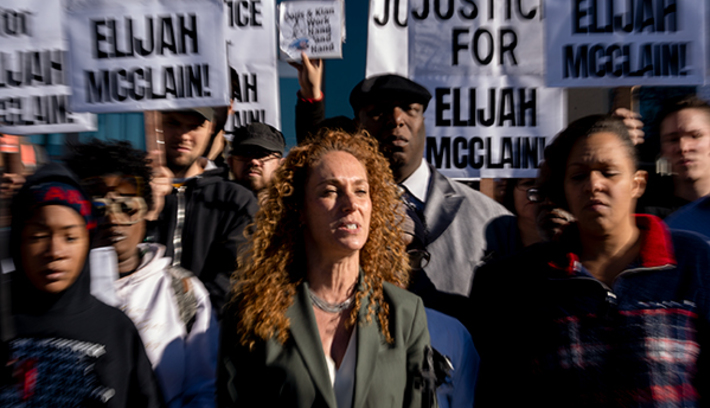 AURORA | Celebrities and activists across the country have brought a flurry of renewed attention to the death of Elijah McClain this week, nearly 10 months after the 23-year-old Aurora man died after he was detained and sedated by first responders while walking home from a north Aurora convenience store.

Social media posts detailing McClain’s death have garnered tens of thousands of likes and shares on Instagram and Twitter in recent days following a burst of posts linked to the hashtag “#JusticeforElijahMcClain.” The hashtag linked to 650 posts on Instagram as of Friday afternoon.

The image, created by Denver illustrator and art teacher Matty Miller, shows McClain surrounded by objects that were dear to him, including musical instruments, a cat and specialized running shoes.

Miller said she was prompted to create the image earlier this month after learning of McClain’s case while watching a live stream of a recent protest in Aurora.

“I started researching his story, and it was just heartbreaking and it put me in a state of grief learning about who he was as a person,” Miller said. “He felt like somebody I would have been friends with, or had as one of my students. I was just upset and outraged and sad.”

She said she decided to make the image of McClain in an effort to sell prints or t-shirts to benefit a GoFundMe his family has operated for nearly a year. She contacted McClain’s mother, Sheneen, via Facebook and received her permission to create an image of her son.

“I think some people really don’t want to believe that this is going on or they’ll say that that somebody is almost deserving of this kind of brutality because they have some kind of criminal history,” Miller said. “And I think Elijah’s innocence and gentleness and everything I’ve read from people who knew him make the ridiculousness of those arguments very clear.”

She said she’s planning on giving McClain’s mother a framed print of the image. Miller said she’s pleased her illustration, first sketched in pencil and finalized in the ProCreate app, is magnetizing attention to McClain’s case.

“I’m really happy that it’s helping to make his story known,” she said.

A Change.org petition calling for a new investigation into McClain’s death has also continued to accrue signatures this week, boasting the names of more than 1.1 million people as of Friday. The petition’s goal is 1.5 million signatures.

McClain’s name has been a constant refrain at protests across the metroplex in recent weeks following the death of George Floyd at the hands of Minneapolis police last month.

But some local activists have bristled at the sudden attention being paid to McClain’s death, citing relatively meager turnout at demonstrations held in front of Aurora city hall and at council meetings in the months after McClain died last August.

“We did not have a great show-up and turnout for Elijah,” local activist Candace Bailey said during an Aurora protest held in McClain’s memory last weekend. “Here in Aurora we definitely did not … We cannot continue this, Aurora.”

Denver Public Schools board of education member Tay Anderson offered the sharpest criticism of attendance at past protests.

“Elijah McClain died in this city and nobody showed up,” Anderson said. “It shouldn’t take a Twitter hashtag for you to show up for black people. You have been officially called out.”

“I cannot speak on George’s death because Colorado didn’t care about Elijah’s death,” she told The Sentinel. “Selective Protesting. Colorado fails i(n) accountability for their own residents but urges justice for someone in a different ZIP Code.”

The reignited interest in McClain’s death appeared to prompt accelerated change in the Aurora Police Department this week as Interim Chief Vanessa Wilson announced a quintet of policy changes on Wednesday.

Wilson said local officers will now be barred from applying a carotid control hold, which was applied to McClain’s neck during a 15-minutes struggle with officers on Aug. 24, 2019. Dispatchers will also endeavor to curb calls related to “suspicious persons,” which was how McClain was described by a 911 caller who said he looked “sketchy.”

McClain was unarmed and never suspected of a crime when he was stopped on the sidewalk shortly after 10:30 p.m.

Officials have repeatedly said that police and paramedics who interacted with McClain followed the proper protocols, and the district attorney tasked with legally examining the case cleared first responders of any wrongdoing.

The prosecutor, Dave Young, said earlier this week he does not intend to re-examine the case.

City council members have also chimed into the conversation calling for a new investigation into McClain’s death, with the city’s public safety committee forcefully asking for a “neutral, independent” review of the encounter earlier this week.

A trio of council members later lambasted a separate review of the incident the city manager’s office had organized, saying the man hired to conduct the review, a former Connecticut state trooper, was disqualified from serving as an independent voice due to his standing ties to law enforcement.

The city has since terminated its contract with that investigator. A new review is forthcoming, officials have said.

This story is powered by COLab, the Colorado News Collaborative. Denver Urban Spectrum joined this historic collaboration with more than 20 other newsrooms across Colorado to better serve the public.