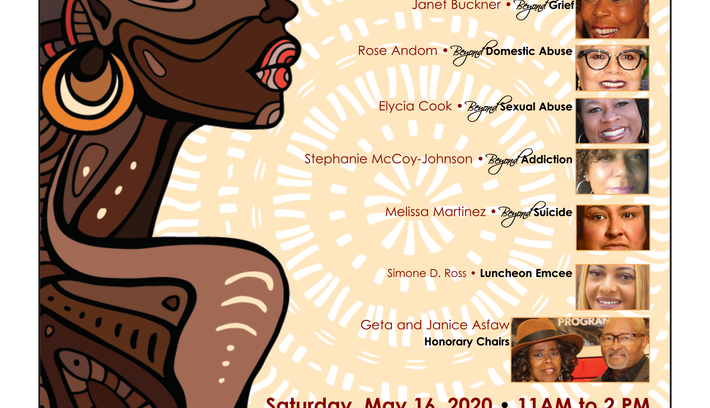 The Colorful Stories of Rose Andom and Janet Buckner 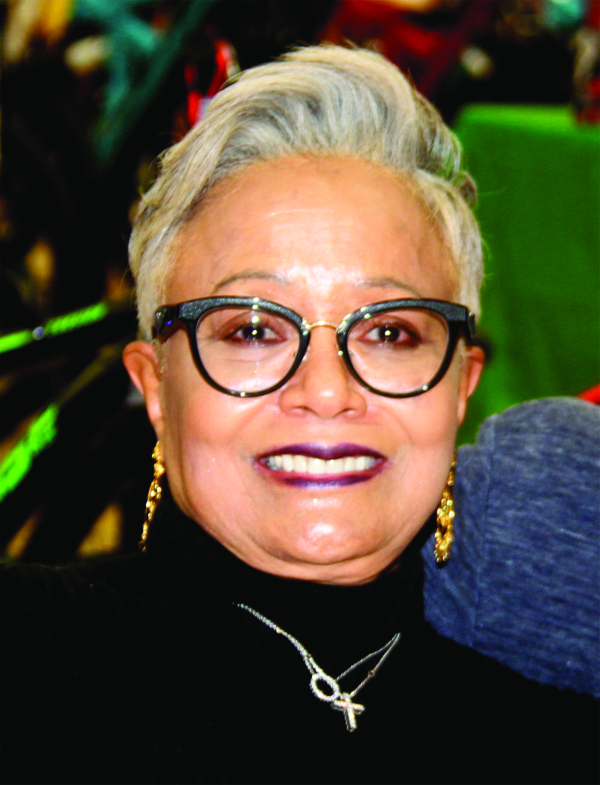 In a time when NFL players are outed monthly for committing acts of domestic abuse, many people have become numb to the epidemic of intimate partner violence. With domestic abuse taking the lives of three women in the United States per day, getting out of a bad situation has become harder and harder. Statistically, it takes a victim an average of seven attempts to leave before they are successful. And when children witness domestic abuse in the home, it can cause lifelong damage.

This story is all too familiar for Rose Andom. "I was two years old in Oklahoma when my mother divorced my father. She was basically fleeing from him even though she wasn’t married anymore," Rose said. "We fled in the night. We just threw stuff in the car and got in, never to return."

Andom's mother brought her family to Kansas City, KA, where she sought out work as a domestic, to do what she had to in order to raise her three children. "I grew up watching my mother being an extremely strong person and one of the things that I recall her saying on more than one occasion was, 'No one can take care of you better than you can take of yourself.' I think I was probably a teenager the first time I heard it."

Along with two brothers, Andom was sent to Catholic school, to earn an education and start toward the life that her mother never had. All the while, Andom's mother remained single and determined to keep her children safe. "She had a few relationships that I can recall, but she never remarried until I was in the 11th grade," Andom said. By that time, Andom's sights were set on college at Kansas University, and then to a position at the Ford Motor Company. For a moment, it seemed that Andom had left the abuse in the past and was headed on her path toward success.

That was until she met Michael.

"There were signs before I ever married him and like so many women I know, we ignore everything," said Andom. "I saw some of the jealousy, the abusiveness, the controlling behavior early on but I didn’t want to see it.

"My first marriage was the first relationship I’ve ever had that was abusive and I kept saying, 'he’ll change, he’ll see how much I love him, he won’t be so jealous.' But they don’t change, and he didn't."

Although at this point, it seems clear that she needed to get out of that relationship, the effects of mental, verbal, and physical abuse can make that decision far harder. "I actually left him a couple of times and went back," said Andom. And when Michael got a job offer in Los Angeles, Andom moved with him. This transition also put her in a position of risk. "I left my job because he got the job in LA," Andom said. "I wasn’t working then because he didn't want me to." This power shift paired with their physical relocation was a crucial move by Michael to truly control his wife. "He controlled the money and everything. He was so jealous and possessive."

This continued for a few years until a 1981 fight between the two changed everything. "He threatened to kill me the previous night, so I fled," said Andom. "I had a cousin who lived in LA who I grew up with. He was more like a brother than a cousin, so I slept on his sofa. I thought about going back to Kansas City and my cousin said, 'Why would you go back to Kansas City? You have an MBA, you’ve had great jobs. If you can make it there, you can make it here.'"

Those few words of encouragement – plus an introduction to the fast-track program at McDonald's – were all Andom needed to make the jump. "Once I moved on, I was good. I was just determined to never put myself in a situation like that again," Andom said.

With a divorce in the works, Andom moved up the ladder quite quickly. "I supervised a group of five company-owned stores; I was a training consultant, and then a franchising manager. Over the course of 11 years, I held all of those various positions." Her work was where she channeled all of her energy. "There were weepy days, but the determination overpowered the sadness."

That sheer determination paid off. Andom continued to make big money moves on the McDonald's track. "Over the course of 21 years, I owned six McDonald's in three different states," she said. "I sold the last three franchises in 2015 that were in the Denver International Airport."

With all of the success Andom's career has afforded her, she decided it was time to give back to the community. About ten years ago at a meeting with Mayor Michael Hancock, Andom proposed her interest. "When he asked what I was passionate about, the first thing out of my mouth was 'helping survivors of domestic violence,'" she said. "I didn't know it at the time, but he proceeded to tell me about his twin sister who had been killed by domestic violence. And that turned into the Rose Andom Center."

Meant to improve the lives of domestic violence victims by facilitating better access to services, staff, community organizations, and government agencies, the Rose Andom Center has made history as Colorado's first family justice center. Andom's story is proof that hard work and determination can help you achieve anything. "I want other women to know that it won't get any better if you stay. I stayed much longer than I should have," Andom said. "I would also tell them that you deserve better." 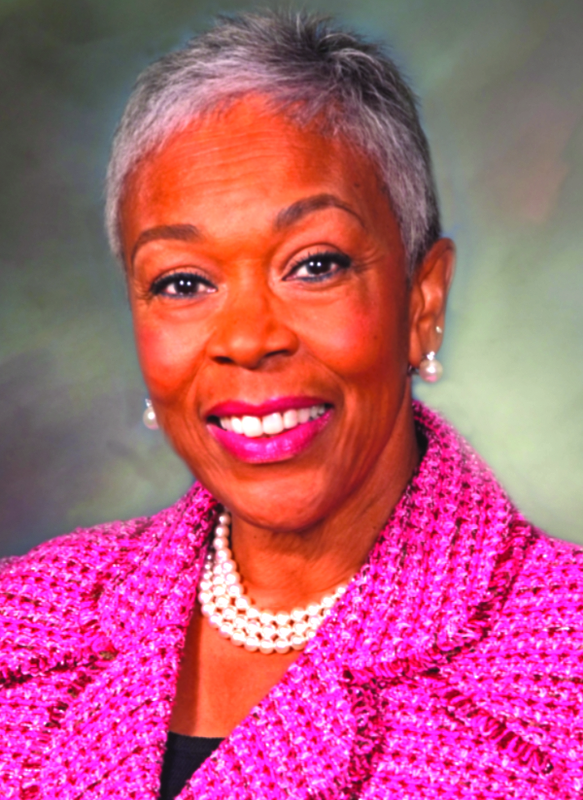 During Janet Buckner's first year studying speech pathology at Ball State University, she was asked out on a Coke date. "To be honest, he was a nice guy, but he just wasn't my cup of tea," she said. Despite being less than interested, Janet went on the date and returned to her dorm without skipping a beat. When the guy called later trying to talk, the conversation wasn't going anywhere. "But then I heard somebody in the background talking and I said, 'who is that in the background trying to tell you what to say? Put him on the phone!'"

On the other end of the line was John Buckner, a history major at Ball State, and a really good friend of Janet's suitor. John didn't know Janet, and the two struck up a conversation. A few weeks later, John admitted to peeking into her classroom to see what she looked like. That's when he decided to pursue her himself.

"We started dating and dated through college," she said. "We were just so compatible, even all of my girlfriends knew we were perfect for each other." From that point on, John and Janet were inseparable. Married in 1969, the pair started growing their family and exploring their careers as teachers in Elgin, Illinois. "His passion was being a teacher and being an educator, but we didn't love Elgin," said Janet. "So when a friend told John that he was moving to Aurora, Colorado to start a high school, and wanted John to help him, we decided to visit Denver."

In pure Colorado fashion, their first visit to the Mile High gave them snow in May. And yet, they were intrigued. "We liked what we saw. I think we liked the idea of venturing out and trying something new and different." This visit marked their move and a big transition for Janet, as well. She took the next few years off to raise their family and ended up working for Johnson & Johnson doing medical sales.

"Because I retired from Johnson & Johnson, John was able to do the thing that he loved most," said Buckner. "He was at Overland High School for 17 years before we both retired." That was in about 2008. The second-year after retirement, John was getting antsy and his wife could tell. “There is only so much golf you can play,” she said.

That's when the Democrats knocked on their door. "They literally asked John to run, and he, of course, didn't think he could do it. He recommended someone younger," Buckner said. "I encouraged him to run because he was such an intellect."

Aside from his list of qualifications, John's motives were what stood out. "John was in this because he had already had his career. Now, he wanted to make a difference." And that he did.

On the night in 2012 when John Buckner was elected to the Colorado House of Representatives, he did what many politicians do at the end of a campaign. He thanked his team, he thanked his supporters, and he thanked his wife. "At the very end, after thanking this ballroom full of people, he said, 'You have the wrong Buckner,' and then he thanked me," Buckner said. "He thought that I should've been the one [to win]. So I believe that my steps were ordered because it was almost like he was telling everyone that they got the wrong person." Whether he knew it or not, John's statement was all part of a bigger plan for Janet.

Four years later, when faced with the decision to fill her husband's role after his sudden passing, Janet recalled this moment and knew exactly what she had to do. “By statute, his position had to be filled within a certain length of time, so I was getting calls nonstop from everybody encouraging me to take his spot,” said Janet. “I never thought of going into politics, and especially now after I've lost the love of my life...how am I going to do that?”

It was as though Janet was responsible for keeping John's legacy alive. “About two weeks after John died, my son and I sat down with a bottle of wine on the front porch and I asked him to help me make a list of the pros and cons of me taking John's place at the capitol,” said Janet. The pros list was longer than the cons. “Then I started thinking about who was going to take his place instead and I realized...I can't let this happen, I have to finish what he started.”

So that was it. Janet was going to move forward with replacing her late husband in the Colorado House of Representatives, a role that she had was preparing for all along (even if she didn't know it yet). "During John's first year down at the state capitol, he would come home every night and we made a habit of talking about everything that happened at the capitol that day,” said Janet. “In his third year, he was made chair of the education committee, so I would listen in to those hearings and actually critique him. In hindsight, it was like I was preparing myself.”

Going on to take part in anti-oppression hairstyle legislation, the renewal of the organ donation system in Colorado, and stopping expulsions for ECE kids, Janet has continued to make her mark on our community's history. And right beside her, is John. “Every day in the hospital, John would be saying, 'what's next, what's next,' and so I've sort of adopted that as my life's motto.”

If you're wondering how she's doing this well despite the loss of her husband, let's put it this way: There is nothing that Janet wanted to say to John while he was alive that she didn’t say. “You know I look back on my life and think – some people don’t get to stay with their mates for even 10 years. I mean, we were together for forty something years when he died,” she said. “And I honestly and truly think that going down to the state capitol and becoming a state representative is what saved me. It filled that void and it gave me purpose.”