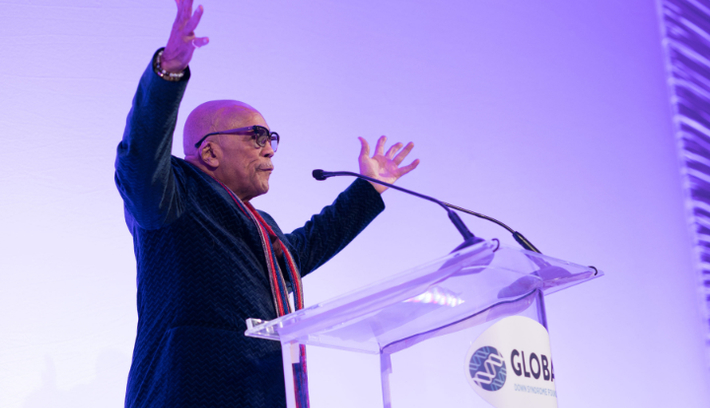 Words like icon, legend, superstar, idol and mogul have all been used to describe Quincy Jones. However, they all seem to fall woefully short in measuring the greatness of this pioneering musical impresario.

He is a performer, conductor, arranger and producer all rolled into one person. His 80 Grammy nominations and 28 Grammy victories ranks him number one among living Grammy winners and second overall. These, among so many other achievements, stand as a testament to his significance as an artist.

So, when he arrived in Denver last month to headline a start-studded gala for the Global Down Syndrome Foundation it brought out many of Denver’s finest and set a new fundraising record of $2.5 million for the organization.

Down Syndrome, also known as Trisomy 21, is a genetic disorder as a result of the presence of all or part of a third copy of chromosome 21. There may be a wide range of developmental delays, impacts on physical growth, mild to moderate intellectual issues and characteristic facial features. While there is no cure, organizations like the Global Down Syndrome Foundation are central to helping those with Down syndrome improve their quality of life. 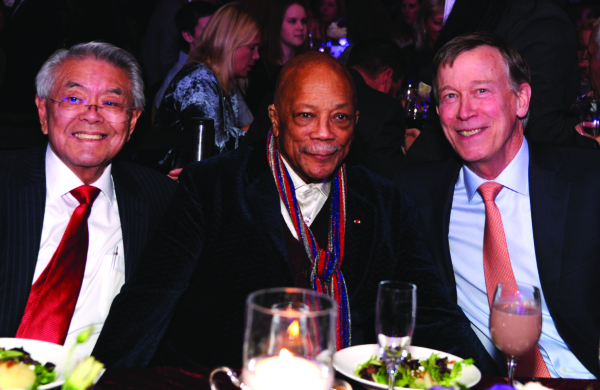 The foundation’s annual event and primary attraction, the “Be Beautiful, Be Yourself Fashion Show” drew Hollywood A-Listers like Jamie Foxx, Eric Dane, Henry Winkler, John C. McGinley and Laura Linney; and of course Jones himself. Held at the Sheraton Downtown Denver, this was the 11th year for the fundraiser which has netted an estimated total of more than $20 million since its inception.

Jones was on hand to personally present the “Quincy Jones Exceptional Advocacy Award” (Q Award) to supermodel Amanda Booth, whose son, Micah was born with Down syndrome. He also presented an award to 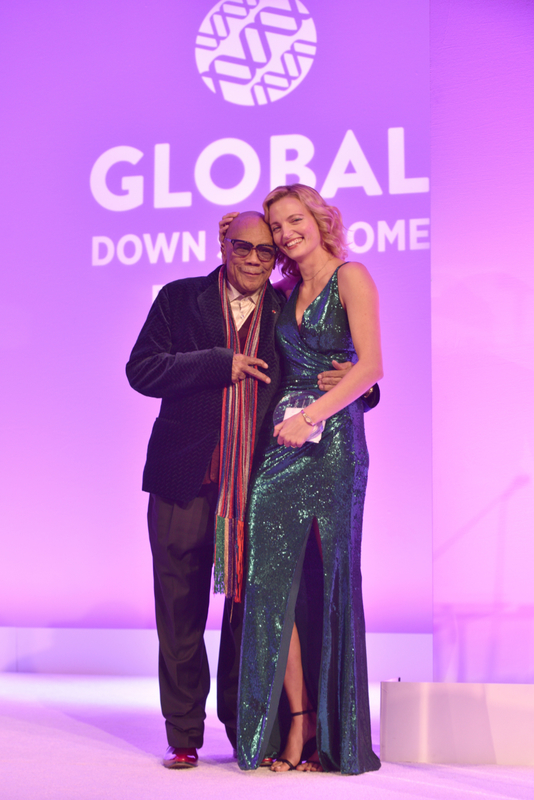 Megan Bomgaars, the A&E star of the reality program “Born this Way.” Bomgaars was the first person with Downs Syndrome to become a member of a college cheerleading squad in the state of Colorado at the University of Colorado-Colorado Springs.

The show featured some 22 models with Down syndrome who were allowed to strut their stuff on the runway. Perhaps the most recognized of the models was DeOndra Dixon, sister of Academy Award winning actor, Jamie Foxx, who was also on hand to support the evening’s gala.

The “Be Beautiful, Be Yourself Fashion Show” is the largest fundraiser for Down syndrome in the world. The proceeds are used to fund life-saving research and medical care at the Crnic Institute for Down syndrome and the Rocky Mountain Alzheimer’s Disease Center.

Dixon, a 2009 recipient of the “Q” Award has also been an ambassador for the organization since 2011. According to Dixon, the Global Down Syndrome Foundation does a terrific job helping people learn about the condition.

“I’ve been involved for a long time now,” Dixon said. “I think they do a great job in raising money and teaching the public about Down syndrome – a really great job!”

Known for her moves on the dance floor, she pledged to shine once she hit the stage. 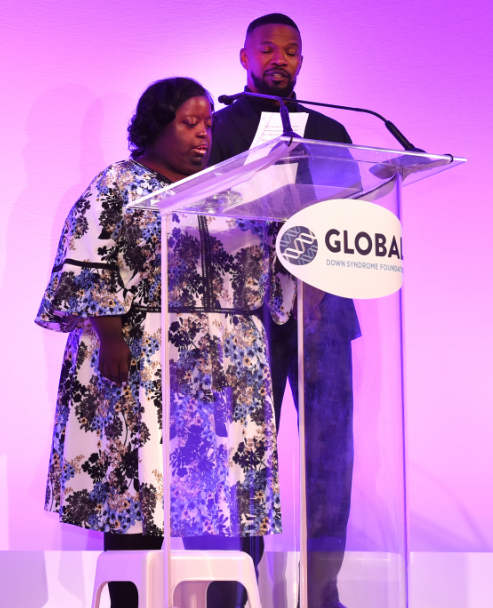 “I can out-dance my brother Jamie, of course, and I plan to make my partner, former Denver Broncos running back Terrell Davis, look real bad out there tonight,” she joked.

Davis admitted to having his work cut out. “DeOndra is a professional so I may have to bring my “A” game tonight,” he said with a broad smile. “This is my first time being in a fashion show and I’m relying on her to show me how it’s done.”

Davis admits that this is his first year being involved with Global but hopes to continue his support in the coming years.

“It is remarkable that I can come out to show my support and help bring some attention to Down syndrome and hopefully raise a lot of money for this worthy cause,” Davis said. “I have learned quite a bit about Down syndrome and I am concerned about the low level of federal funding for it – and it’s sad. Global puts on events like this in order to supplement the research and program needs. It’s nice to part of this. Global has done a magnificent job in bringing needed attention to Down syndrome.” 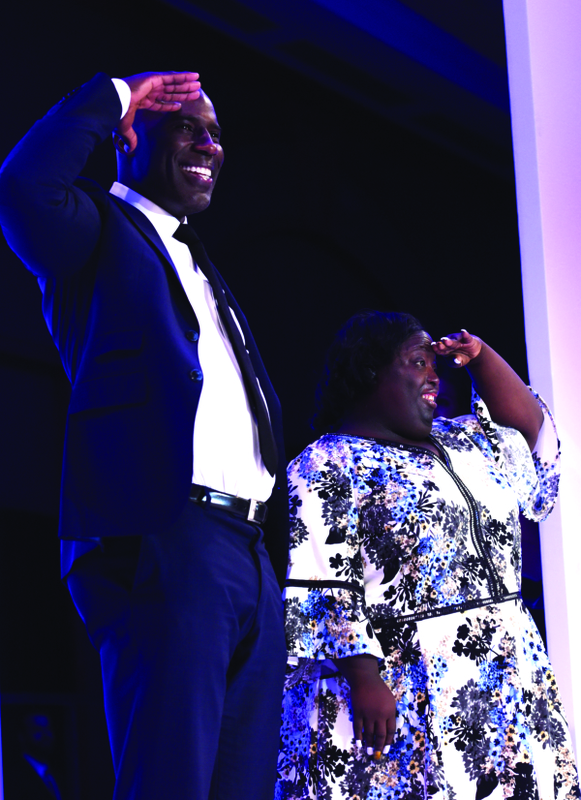 But for Jamie Foxx, his key focus is on the advances in research for Down syndrome. Standing next to DeOndra on the red carpet, embraced in a hug, he says that he is inspired by developments in studying the condition.

“I am encouraged that they continue to make strides in the research into Down syndrome, particularly the work with chromosomes,” Foxx admitted. “They are revealing new ways for those with Down syndrome to better care for themselves and live longer, more productive lives. But it takes a lot of money to do this and that’s why we have been long-time supporters of the efforts by this wonderful organization.”

It was in 2008 when the Global Down Syndrome Foundation created the award named for Quincy Jones. It was established in recognition of Jones’ humanitarian leadership and work on behalf of the disadvantaged; particularly those with Down syndrome.

In a 2008 statement released by Jones, he expressed in profound gratitude:  “I believe from the bottom of my 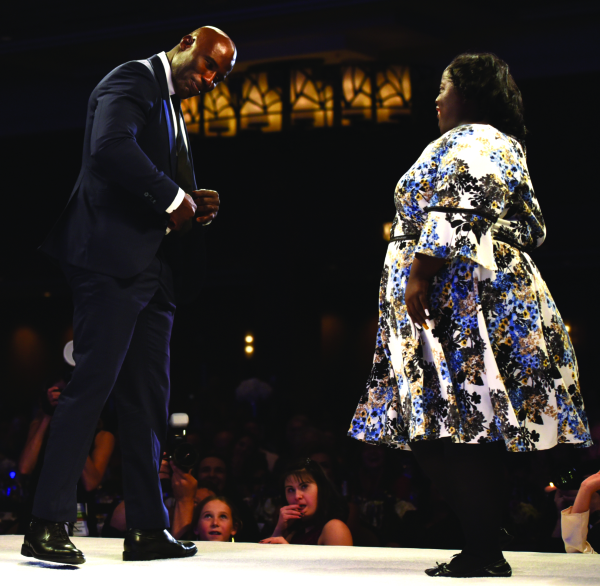 heart that every child on this planet has something to offer mankind and they can soar to the highest mountain tops if they are given the opportunity to do so. As the first national institute that will comprehensively address the basic clinical research and care for people with Down syndrome, I have no doubt that the Linda Crnic Institute for Down syndrome will be the world’s leading care center for those impacted by this condition. It will also provide an avenue for obtaining undeniable and fundamental civil rights for these beautiful children, so that they can achieve everything they can imagine. I am enthusiastically looking forward to working with the patrons of this institution to bring those goals to fruition in any way I can.”

Jones has been heavily engaged in philanthropic endeavors since the 1960’s but it was his 1985 anthem, “We Are the World” that catapulted his image and reputation as a humanitarian. The initiative, organized to raise funds for Ethiopian famine relief, reportedly garnered more than $63 million. 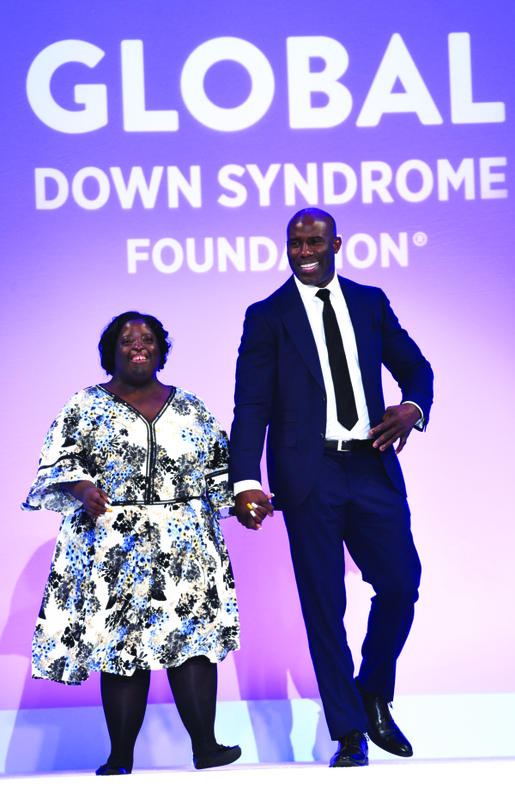 It was Jones’ clout in the entertainment industry that brought together a collection of the biggest names in the music business including Michael Jackson, Lionel Richie, Cyndi Lauper, Bruce Springsteen, Tina Turner, Billy Joel, and Diana Ross among more than 30 other chart topping artists.

It has been said that Frank Sinatra first conferred upon Jones the nickname “Q” in 1964 when he called to ask him to do an album with Count Basie and himself. His list of collaborations and awards over years are far too numerous to list in a single article. Needless to say that it is a veritable “Who’s Who” in music.

In addition to having snagged 28 Grammy’s Jones has also been bestowed with an Emmy, a Tony and nominated for seven Academy Awards; among a long list of others including the Jean Hersholt Humanitarian Award in 1994. He was finally inducted into the Rock and Roll Hall of Fame at the age of 80 in 2013; curiously receiving a non-performing honor even though he had been performing for more than 60 years at the time.

Last year, Jones was the focus of a feature-length documentary of his life’s accomplishments titled simply “Quincy.” The work was directed and written by his daughter, Rashida. The film received the 2019 Grammy for Best Music Film of the Year.

In 1974 he would suffer two brain aneurysms.  In spite of these serious health challenges, he went on to produce hit after hit, after hit. In the 70’s and 80’s his list of smash hits for legendary artists like Aretha Franklin, Michael Jackson, George Benson, The Brothers Johnson and countless others made him a house hold name. Michael Jackson’s “Thriller,” produced by Jones, has sold an estimated 120 million copies worldwide – it’s still the best-selling album of all time.

Jones, now 86 years old, was born in Chicago in 1933. His family would later move to a suburb of Seattle in the early 1940s. There, he began playing the trumpet and met another aspiring entertainer by the name of Ray Charles. A scholarship to the Berklee College of Music in Boston, in 1951 would seal his faith and launch him onto his extraordinary journey. He would soon find himself producing and arranging music for legendary artists such as Lionel Hampton, Count Basie, Dinah Washington, Ray Charles, Sarah Vaughn and Tommy Dorsey.

It was through the Global Downs Syndrome Foundation that Jones began to witness the inequity in research funding for Down syndrome. He considered increasing the funding a matter of both civil and human rights. He immediately began working with the organization and soon the Quincy Jones Exceptional Advocacy Award was created. Designed to honor Jones’ work as a global humanitarian, the annual celebration continues to raise millions of dollars to benefit research, outreach and support for those with Down syndrome. The event features award categories to honor humanitarian work, public service and self-advocacy.

According to a statement from the Global Down Syndrome Foundation, “People with developmental disabilities, especially Down syndrome, are too often neglected and underestimated by our government and society as a whole. With Quincy’s generous support, we are able to pay tribute to public figures who have taken the time to understand our children and dot shine a light on their contributions to this world. Also in Quincy’s name, we honor those self-advocates who are changing our world as role models anyone would be proud to emulate. The Foundation is deeply appreciative of Quincy Jones and the outstanding recipients of the Quincy Jones Exceptional Advocacy Award.” 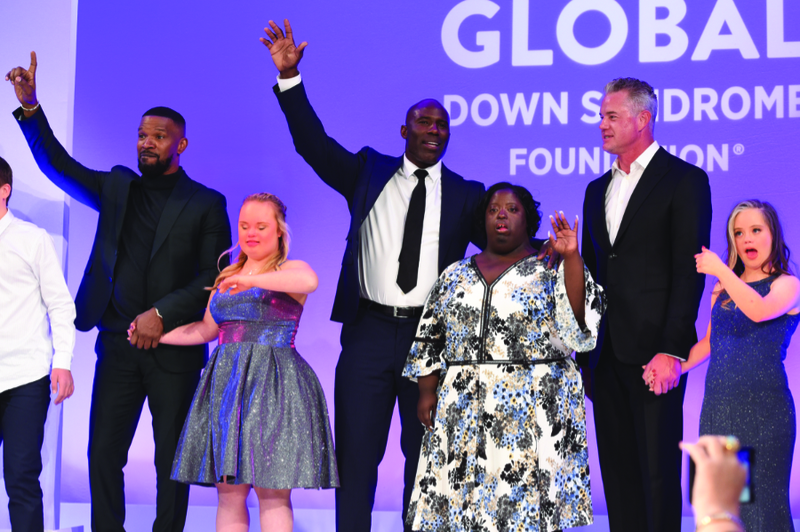