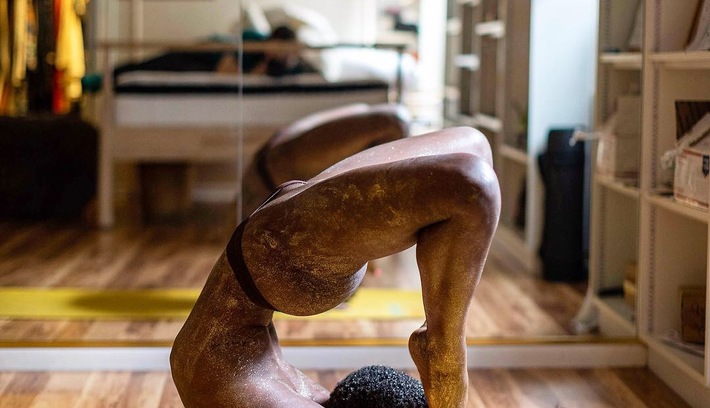 At first glance, Shelby Holly-Page is a majestic force of nature, with striking ebony skin stretched effortlessly into seemingly impossible poses. Her sleek frame expresses strength from the crown of her shaved head to the tip of her perfectly flexed toes. Her stunning beauty is matched by artistic fluidity and quiet grace, as she invites a global audience to witness the power of her craft. She is Chocolate Yoga, and she is taking the world by storm.

In the last decade, Holly-Page has used the practice of yoga to transform her life, and with a burning desire to expand representation of the ancient practice to communities of color, she is utilizing her platform to transform the lives of others.

Yoga, a word that means union with God, is a spiritual practice that harmonizes human and divine

consciousness while releasing and controlling internalized energy to create balance between the body and mind. Hatha, the physical branch of yoga, deepens this mental and physical harmonization with a sequence of postures (asanas), and breath-control exercises (pranayama). Once peace of mind and body are achieved, practitioners enjoy a deeper state of awareness through meditation and strengthened energy, which releases stress, tension, and illness. While the practice dates back to Hindu traditions developed in pre-Vedic India sometime from 500-1900 BCE, more recent practices combine the influences of Hinduism, Buddhism, and Jainism.

The United States’ introduction to yoga is largely credited to Swami Vivekananda, a Hindu monk who appealed for increased financial support for India at the World Parliament of Religions in Chicago in 1893. As the practice gained popularity throughout the 1900s, immigration laws enforced in 1924 halted the influx of Indian teachers, forcing yoga-enthusiasts, including popular figures and celebrities who could afford the expense, to travel to India to learn the sacred art. By the 1950s, America’s first yoga studio was created in Hollywood, igniting the mainstream trend that has exploded into a $27 Billion industry.

Yoga’s transition from an ancient spiritual practice to a business-focused mainstream activity was facilitated by homogenous groups of privileged individuals during one of the most fervent struggles for social justice in history. Yoga was neither visible nor accessible to communities of color, with studios set up in swanky, segregated neighborhoods. Considering the roots of religion and spirituality within the Black community, the practice of yoga may have seemed oppositional to the idea of external divination; the focus on divine consciousness within the self would have been an intolerable concept among devout Black Christians, who were disallowed from learning about their own history, much less the history of other groups and spiritual practices from around the world.

Holly-Page is a trailblazer, who is dedicated to increasing inclusivity and visibility within the yoga industry, while showcasing the benefits of yoga to communities of color in hopes that all people will reap the mental, physical and spiritual rewards.

9 years ago, while attending the Maharishi University of Management in Fairfield, Iowa, Holly-Page was introduced to yoga for the very first time. The university, a “Home of Consciousness-Based Education,” focuses on each student’s personal inner growth and wellness, with stress-reducing course requirements to promote a healthy lifestyle. “Yoga was a requirement,” says Holly-Page, “I was into it in class, but I wasn’t in love with it, so I did some research.”

Wanting to immerse herself more deeply in the practice, Holly-Page was discouraged by the high cost of yoga classes and one-on-one lessons. “I had to teach myself with social media, online videos, books, and whatever I could get my hands on,” she recalls. “I looked up tutorials on YouTube, yoga classes in my area, and people to follow on Instagram that I could look up to for inspiration and motivation, but there was no representation for people of color. I couldn’t find any Black women in the westernized/Americanized yoga scene.” Holly-Page decided that she would be one of the faces of yoga, to diversify the practice and show people that yoga is beneficial and achievable for everyone. “Eventually I wanted the number of Black people who are involved in yoga to grow. Yoga is not exclusive to a certain group of people; we all need these benefits.”

Holly-Page used Instagram as a platform to share her journey, and her efforts were a great success. With nearly fifty-thousand followers, she has solidified her role as a representative of Black yoga, as she inspires others to explore and embark on a yoga journey of their own.

In addition to the astonishing contortions she manages to achieve, Holly-Page’s Instagram account captures the attention of thousands with her bold and artistic bare-skinned photos. Boulder’s beautiful outdoor landscape and Denver’s artful city scenes fade into the background as Holly-Page tastefully bends, stretches, and folds her naked body into some of the most challenging yoga poses. However, when yoga-enthusiast and entertainment mogul, Russell Simmons, shared one of her photos, conflicting responses brought attention to the controversial nature of nudity on the ‘gram.

“Nudity came along with me shaving my head,” says Holly-Page, “It was a rebirth, a newfound acceptance for myself. I’ve always been an advocate for body positivity; nudity is natural, and doesn’t indicate sexuality.” The yogi/model transitioned from partial to full nudity after years of modeling and posing for figure-drawing classes, and while she recognizes the intrinsic value of photos that highlights engaged muscle structures, she acknowledges that everyone isn’t on board with the au naturel. “I’ve heard it all!” she laughs, “You can’t please everyone. There are times when I definitely get affected by things people say, but I’m the only person who can govern my happiness and I can’t let what other people think and feel about me be a factor.”

Instead of combating negativity, Holly-Page engages her social media audience in thoughtful and provocative discourse about everything from sexuality to racism. “I learn something new every single day, and I’m thankful for that,” she says, “I know there are folks who feel like I talk about racism too much, but so what? It happens on a daily basis. I experience it on a daily basis, and other Black women experience it on a daily basis - So I’m going to talk about it until we are all experiencing it…and it stops.” Whether her social media platform is ruffling feathers or healing hearts, Holly-Page has been successful in growing her influence along with her practice.

In 2020, Chocolate Yoga fans will have more opportunities to work with Holly-Page through group classes, private lessons, company health events, and wellness retreats centered on body positivity. “I want to keep inspiring. I want to get my name out there and bring yoga even deeper into the Black community.”

Communities everywhere can value from the energy, flexibility, balance, and circulatory health improvements that yoga provides. At a time of great social unrest and dis-ease, the Black community should embrace yoga as a daily practice to harmonize the body, spirit and mind.

Editor’s Note: You can find Shelby Holly-Page on Instagram @Chocolate_Yoga. For classes and information, email Chocolate_Yoga@yahoo.com.