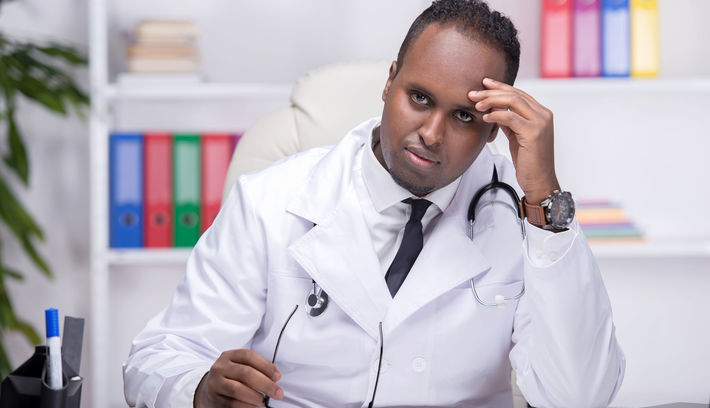 The decline in the number of Black male physicians over the past several years has become a disturbing trend that promises to result in long term, deleterious effects within the African American community nationally.

So what do the numbers tell us? Medical schools have been trying to improve diversity among its students for some time now. Yet, they have experienced stagnation for the past four decades. For instance, in 1978 there were 1,410 African American males applying for admittance to medical schools. Recent data by Association of American Medical Colleges (AAMC) suggest that number stood at 1,337.

The data also found that there were 542 Black graduates of MD granting schools in 1978; against 515 in 2017. These numbers do not align with the overall number of Black students entering college in other fields.

With Black men experiencing the shortest life span among all racial, ethnic sub-groups, the need for more physicians that mirror this population could potentially improve health outcomes significantly. As of 2016, according to the Centers for Disease Control (CDC), Black men had an average life expectancy of 71.5 years with white males averaging 76.1 years.

As a result of past cruelties, such as the Tuskegee Experiment where Black men where subjected to unspeakable medical atrocities and experimentation, African American men remain highly mistrustful of the American health care system, with some clear, historic justification. The sheer presence of a Black male doctor could inspire Black men to engage in much needed preventative health care; thereby extending their life expectancy.

According to the National Bureau of Economic Research, African-American men's uses of preventive health services vary when they had Black and non-Black doctors. The bureau reported in 2017 that Black doctors could reduce Black men's deaths from heart disease by 16 deaths per 100,000 every year, for instance. That would reduce the gap between Black and white men by as much as 19 percent.

For many Black men, Black doctors bring a higher level of cultural understanding and reliability resulting from their background in the community. This is a major factor in the doctor-patient relationship.

Renowned Denver-based physician, Dr. Johnny Johnson agrees adding, “This is a crisis in health care. The decline in Black male doctors is systematic, structural and complex. There is a racial disparity in the country and the government does not seem to be concerned. Although African Americans represent approximately 13 percent of the population, we make only 4 percent of the nation’s physicians.”

Last month, the National Association of Health Service Executives (NAHSE) hosted its First Annual Celebrity Golf Tournament in order to raise much needed funds for scholarships aimed at encouraging, and helping to finance, a medical education for Black students; with a particular focus on males.

“The lack of Black male doctors not only affects African Americans but the health care system as a whole,” Johnson said. “Black males are recognizing many obstacles as well as pursuing other interests. Our recruitment efforts need to begin as early as 3rd grade. We have to initiate our own agenda to ensure that we level the playing field while creating a pipeline for additional financial means to pay for medical school.”

According the organization’s website, “its purpose is to ensure greater participation of minority groups in the health field. Its primary mission is to develop and maintain a strong, viable national presence to more effectively have input in the national health care delivery system. It has provided a vehicle for Blacks to effectively participate in the design, direction, and delivery of quality health care to all people.”

The group’s local president, James Corbett, says the association was founded 50 years ago to aid in providing health care services to African Americans when the American medical system was largely segregated.

According to Corbett, Black leaders began to realize the need to build more capacity within health service organizations in order to mitigate lingering discriminatory practices.

“Black people were experiencing a great deal of bias, though some of it unconsciously, by white institutions,” he said. “There needed to be more focus on creating empathy in the health care system and that’s why NAHSE was established.”

Participants at the fundraiser included several high profile past players of the Denver Broncos. They appeared genuinely excited to be involved in the event; and the organization’s goal of helping Black students to become doctors.

According to former Bronco’s wide receiver, Brandon Lloyd, the key to increasing the number of Black male doctors lies in providing Black physicians as mentors for young Black males.

“I’m a believer in mentoring and providing like images and reflections,” Lloyd says. “The issue has multiple, simultaneous moving parts. The most important factor is their ability to afford to go to medical school. Second, are they prepared academically and third, do they see individuals who look like them in the profession who has already blazed the trail—do they have mentors?”

Corbett says that he would encourage school officials to seek out practicing physicians and other health service professionals to engage with their students.

He says that this year’s event will set the initial fundraising benchmark for their financial goals moving forward.

“We don’t really have a specific financial goal in mind for the first year’s effort. What we raise today will be used to create a benchmark for our future goals. The idea is to hopefully double that amount next year,” Corbett says.

That support cannot come fast enough as four years of medical school is rapidly approaching $200,000; and in many cases much more. The debt reportedly takes decades to repay. It becomes a daunting task for students from poor families—and the draw of other professional career options such as Law or an MBA, that require fewer years of training and a faster path to a professional paycheck also factors into many Blacks student’s decisions on their choice regarding their college majors.

However, organizations like NAHSE do not exist in a vacuum. Efforts by the medical schools themselves as well as that of other organizations such as the National Medical Association, an organization founded by Black doctors, continue to search for additional strategies for raising the number of African American physicians.

The news is not all bad, however. The Association of American Medical Colleges reported that there has been a good deal of some success. For example, the number of medical students who identified as African-American or Black grew from 3,722 in 1980 to 6,758 in 2016, an 82 percent increase. Although, the number of Black females continue to significantly outpace that of Black males.

Although the task of increasing the numbers of Black male doctors is a bit disheartening, it is not impossible. The use of technology is providing a more optimistic viewpoint. Many doctors around the nation are creating social media campaigns to heighten the visibility of Black men in the medical profession. The creation of a campaign entitled #BlackMenInMedicine shows promise in reaching the so-called Generation Z—born after 2004. The campaign has experienced several millions of impressions since it began in 2017. It has also begun to expand to other social media platforms.

There is no one silver bullet to address the crisis of declining participation of Black males in medicine. In the end, it may take a more concerted approach involving schools, churches, hospitals, colleges, parents, and social media to join in the efforts launched by NAHSE to reverse this disturbing trend.